Your browser is out of date, please upgrade it. 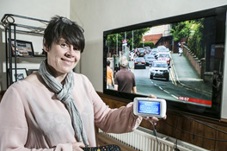 Janet’s smart meter helped her to identify where she and her daughters were using unnecessary energy and how they could make money-saving changes. Janet lives in a bungalow in Barry, South Wales with her two teenage daughters, two dogs and a cat.

I had already heard good things about smart meters from a friend at work so I didn’t hesitate when our supplier offered us one in the autumn of 2014. The installation was straightforward and I was given a very clear demonstration of how the in-home display could help us to be more aware of the gas and electricity we use.

When I first got the in-home display I found it rather fascinating and couldn’t stop playing with it, much to my two daughters’ amusement. Ours has a traffic light system that changes from green, to amber, to red depending on how much gas and electricity we’re using. It also beeps to warn us if we’re using more energy than normal – a feature that on more than one occasion has sent my youngest daughter scurrying around the house unplugging things.

In the past I relied on estimated energy bills because taking a meter reading always ended up at the bottom of my to-do list. When I finally got our last manual reading I found out I was in quite a bit of credit because our estimates weren’t representative of what we were actually using. Although the refund was a nice surprise, having a smart meter has really helped me to keep an eye on things.

Having the in-home display at home has also helped us as a family to change our habits. l always unplug everything in my daughter’s room while she is away at university because I realised that leaving devices on standby really does add to your bill. I also make my coffee straight away, rather than forgetting and then having to re-boil the water ten minutes later. You’d be surprised how much energy a kettle uses!

I really like that I have the information I need to make comparisons from day-to-day or week-to-week. If it’s just me in the house I spend about £2 per day on electricity, but if my daughter isn’t in school it’s more like £12 – a revelation that has become a bit of a running joke between us! I would never ask my girls to stop using the gadgets they enjoy, but I think it’s important that they understand how much gas and electricity costs. If we’re wasting energy, we’re also wasting money that we could have spent on something else.

We still pay the same monthly direct debit but since having the smart meter installed our bills have definitely gone down. Since October 2014 (to June 2015) I have received £480 of refunds from my energy supplier as we become increasingly aware and continue to reduce our energy consumption.